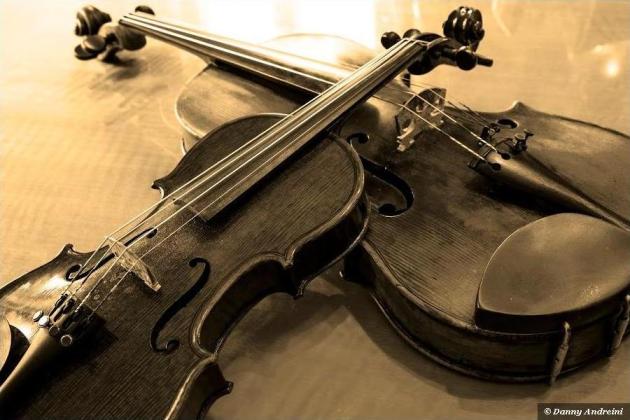 On an autumn afternoon, unexpectedly, a vivacious counterpoint crosses Lambton Quay and stirs up in me both joy and nostalgia.

To me, there’s always been something vaguely sinister about Wellington’s Opera House Lane. That feeling was pretty strong when I was walking through last Wednesday. But it wasn’t the tagging and graffiti grabbing my attention.

The sculptural bulk of the structure overhead – it must be a walkway, I think – the weathered brickwork, and the qualities of the light combined to make it more than usually impressive. And my camera thought so, too.

“You like buildings, do you?” A mature female voice is addressing me.

I am in Victoria Street, and about to click the shutter on this image, an uncommonly handsome view of the Central Police Station – a strong contender, I reckon, for the title of Wellington’s ugliest building.

Standing at my right shoulder, the speaker is clad in a striking mauve jumpsuit. Jauntily perched on her head is a smart little summer hat. She is not someone I know.

I smile as she wishes me the compliments of the season.

“I like anything that catches my eye,” I tell her. “So be careful.”

The clock ticks three times as she registers what has been said. And then both her thumbs go up. “Nice one!” she declares.

Mathieu A., 2005. From the series, “Autoportraits robots.” Courtesy of the artist and galerie UNIVER / Colette Colla, Paris. © Leandro Berra 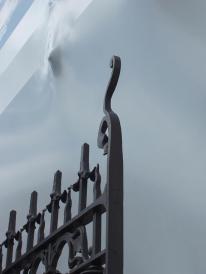 The old iron gates pictured here are on Queen’s Wharf, Wellington. In the background is the Wellington Museum of Wellington City and Sea, sheathed in white plastic sheeting but open for business, nevertheless. (What are they doing, I wonder? I’m still trying to find out.)

“Beginning in the late twentieth century portions of the WHB gates and fences were removed, due to the shifting of the port facilities to the north of Lambton Harbour and leisure and public access becoming a focus for much of the former WHB space. All of the remaining pockets of gates, posts, and fencing form an important part of the historical complex of the former port, visually linking a large area running along Waterloo, Customhouse, and Jervois Quays, from Wellington Harbour Board Shed 21 to the south of Lambton Harbour at Taranaki Street Wharf.” (Wellington Harbour Board Wharf Gates and Railings)

In researching the history of the gates, I found a facsimile of an item in The New Zealand Herald, Volume XXXVI, Issue 11245, dated 14 December 1899, Page 5, which states:

“Two sets of iron gates are being placed at each of the entrances to the Queen’s Wharf. They are very handsome. They are surmounted by large globe lights. The Harbour Board, to quieten the fears of the promenaders, state that no interference will be allowed with persons of either sex visiting the wharf at reasonable hours, but the officers on duty will have instructions to note the condition of persons going to the vessels alongside.” (Papers Past)

Like the group of shots taken more than a week ago, this image was made on Queen’s Wharf, near the TSB Bank Arena and the Museum of Wellington City and Sea. The stylized sails are so photogenic, it’s hard to resist getting the camera out. 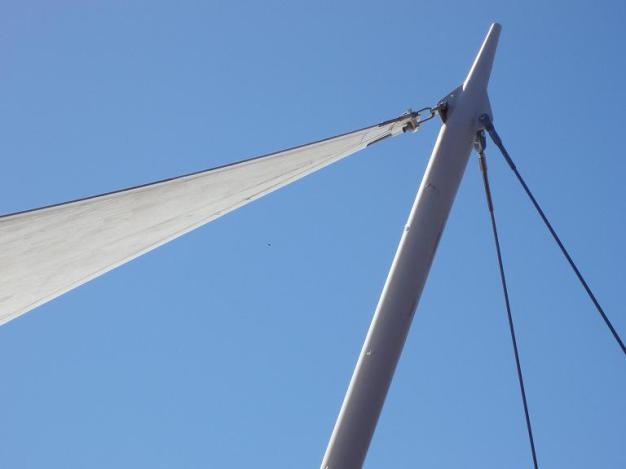 After yesterday’s chilly wind and rain, today’s blue skies and gentle breezes are a real delight. These pictures were made on Queen’s Wharf, near the TSB Bank Arena and the Museum of Wellington City and Sea, where the temperature was around 17 degrees C.

When I posted this image on my Facebook page yesterday, a friend asked, “What type of camera do you use?” When I told her, “An Olympus μ800 (8 megapixels … and about 10 years old)”, another friend (who I know has a liking for really old cameras) commented: “Proof that it’s the photographer and not the camera that makes a picture great.” Thanks, Steve.

This all connects with the ICC Cricket World Cup. For further images of the Village Green, go to this link on the Wellington City Council’s Facebook page.

Carl Barron seems to have managed – for the time being, at least – to make himself pretty much the only one-ended stick in town. Google is clogged, not to say obsessed, with him. Apart from some inane Q&A stuff on Ask.com, the only directly relevant alternative within easy reach is on a web-site put up some years ago by Rochester Area Right to Life.

But please try and follow me as I briefly backtrack: Why is the Right to Life web-site relevant? Because it quotes one Thomas J Fitzgerald on the subject of bias in media writing.

It might have been nice to have provided a diagram, but I cannot actually visualise it – although I’m wondering if Escher might possibly have done something that would make my meaning clearer.

So okay, I’m poking a stick at political correctness – as some folks believe is currently fashionable to do. But I’m doing so only in passing.

Incidentally: these days, “politically correct” does not mean you should not offend anyone; it means no one will be able to accuse you of having said anything wrong (WikiHow: How to Be Politically Correct).

Why are we talking about one-ended sticks? Everyone knows that every stick has two ends.

Years ago, my parish priest (Anglican) memorably pointed out to me something which has stayed with me: all fundamentalists believe the same thing – that they’re right, that they know the truth, and that everyone else is mistaken, misguided, or wrong. The same is roughly true of extremists, I’d say.

Following this perfectly logical line of reasoning, one can easily see why all those right-thinking-and-righteous extremists and fundamentalists are hogging the “right” end of the stick: none of them wants to be at the “wrong” end of it.

Suddenly, the ancient argument about how many angels can dance on the head of a pin starts to make sense.

1/ Touted as Australia’s most popular comedian, Carl Barron is “An Aussie larrikin persona that has been polished to shine brighter than an opal” (NZ Herald, quoted on Scoop Independent News). He gave a performance of his new show, A One Ended Stick, in Wellington on Saturday night, at the Opera House. I didn’t go.

3/ “In modern usage, the terms PC, politically correct, and political correctness are pejorative descriptors, whereas the term politically incorrect is used by opponents of PC as an implicitly positive self-description …” (Wikipedia: Political Correctness).

The other suspects I am the evil twin